This article was originally printed on Jspace.com on May 24, 2013.

When Israeli actress and model Gal Gadot beat out six other candidates for the role of Gisele Harabo in “Fast & Furious,” she signed on for a hell of a ride. Now in it’s sixth film, the franchise is revving up its engine for a splashy release in theaters nationwide.

But Gadot rose to fame far before “Fast & Furious” brought the car heist genre to the American mainstream. At the age of 19, Gadot won the Miss Israel title, and went on to represent the Jewish state at the 2004 Miss Universe pageant. From there, Gadot launched a successful modeling career, becoming Castro’s leading model in 2008. Making the jump to acitng, Gadot has held roles in Israeli and American films, from “Bubot” (2008) to “Date Night” (2010) and “Knight and Day” (2010). In the latest “Fast & Furious,” which critics are calling a thrilling ride, Gadot’s Gisele Harabo joins the team once more to pursue an organization of villainous mercenary drivers in exchange for a full pardon.

Jspace News caught up with Gal Gadot via email to learn more about the latest film, becoming a working mother, and representing Israel on the global stage.

Jspace: This is your third appearance as Gisele Harabo in the “Fast & Furious” series. How did it feel to return to the character?

Gal Gadot: It was great coming back to the set. It felt like a family reunion! The very first film, we all became great friends. In “Fast & Furious,” the fourth film, we were all single. By “Fast Five” we had all gotten married, and during “Fast & Furious 6” everyone came to set with babies!

What was the hardest part about filming “Fast & Furious 6”?

The hardest part was actually the last day of shooting. After being together for four months, we have to say goodbye—but it was really more like, “See you later!” 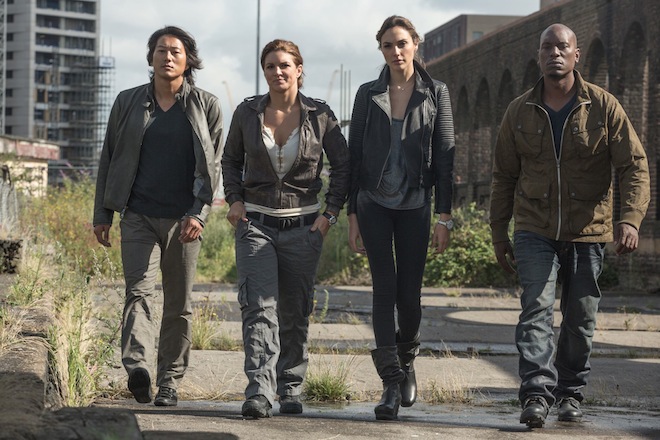 What reactions are you getting from fans about your role as Gisele?

The reactions are amazing. Clearly, this franchise has a lot of loyal fans and I don’t take that for granted. The fans really like the car heist narrative, but more than anything, they care about the characters. For me, as an actress, I feel a lot of responsibility to show Gisele as a role model for young girls. I wanted to show that women are empowered and strong, and don’t necessarily have to be saved by some male hero, but they can take care of themselves using their intelligence and their power.

Has it been difficult to go on the road, shooting and promoting the film with a young child at home?

I actually got to bring my daughter, Alma, along! It has been an amazing family road trip. I feel incredibly privileged to be able to travel the world with my family.

What are the differences between working in Israel and in the US?

The only real difference is budget. In Israel, the budgets are tiny compared to the US. But because of this limitation, the content and the level of creativity in Israel is much higher.

Do you feel as if you are representing Israel in your professional life?

I don’t see myself as an ambassador or anything, but I defiantly talk a lot about Israel and invite the people I meet to come and visit. There are a lot of misconceptions about Israel and it’s very important to me that people know that Israel is a beautiful place with great history and culture.