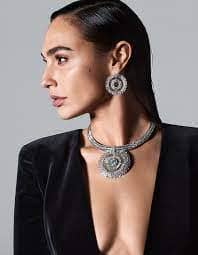 Our favourite actress – the “Wonder Woman” Gal Gadot happens to be the face of the new collection of Tiffany & Co called Botanica. She has signed to be the official ambassador of the company’s high jewelry 2022 Blue Book collection, and we must admit that both the jewelry as well as the pictures of the campaign are stunning.

Alexandre Arnault – the Executive Vice President, Product, and Communication of Tiffany & Co, shared that Gadot is more than an ambassador to the company – she is sophisticated, glamourous, and modern which is exactly what the new collection represents.

The pictures of the campaign that were released a few weeks ago are breathtaking. Gal Gadot is a natural beauty which is why they captured her with little makeup, showing her natural features and letting her beauty shine through the camera. Just like her makeup, the whole setting of the photoshoot was done in a very tasteful and minimalist setting, with Gal wearing a simple black blazer and showing off the diamonds from the new collection – bracelets, necklaces, earrings, and even brooches.

Gal did comment on the shoot and how honored she is to be the new face of the company. She said that she was very fortunate to be chosen to represent the jewelry and that she really enjoyed the collection and the beautiful pieces.

The BOTANICA collection was previewed in March and was released a few weeks later during an event in Miami Beach. The new pieces will also be available in London in June as well as in cities in China during October.

Will Gal Gadot Make A Debut In “Star Wars”?