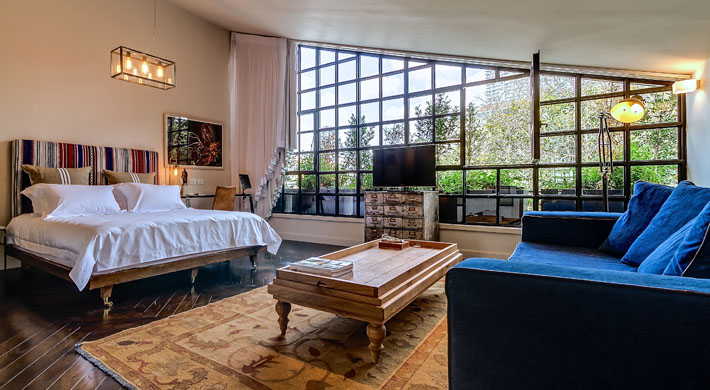 Tel Aviv is the first modern Hebrew city in Israel. Tel Aviv, much like other large cities around the world is made up of different areas, or neighbourhoods, one of which is Neve Tzedek. Neve Tzedek was the first Tel Aviv area to be built and populated outside the walls of the ancient port of Jaffa (now Jaffa is part of south Tel Aviv, and happens to be one of the oldest places around the city). Up to the nineteen eighties the area of Neve Tzedek was quite prosperous and marching forward, this was only natural as the bustling modern city of Tel Aviv was growing and expanding around it. Unfortunately, there was a period of neglect and disrepair around Neve Tzedek which downgraded this otherwise lovely part of Tel Aviv. Neve Tzedek began its recovery and rose again to its former glory after the nineteen eighties when the neighbourhood was redeveloped and polished up by city authorities. These days, Neve Tzedek is one of the most expensive, trendy and sought after parts of Tel Aviv. Residents and guests enjoy the area’s Mediterranean village atmosphere which also makes Neve Tzedek look and feel like a pristine resort.

The Neve Tzedek area was founded twenty two years before the official establishment of the modern city of Tel Aviv, in eighteen eighty seven to be precise. Neve Tzedek was chosen as a quiet, calm and clean place outside overcrowded Jaffa, by a number of Jewish families who wanted a better, more suitable place to live, close to Tel Aviv’s central parts. Those pioneering families were soon followed by others who also appreciated the locale of Neve Tzedek, and little by little, one development at a time, the area became a settlement, just outside the city, though nowadays modern Tel Aviv has engulfed the neighbourhood within its city bounds. Neve Tzedek is a trendy area by default. Back when the first Jewish families began developing, they built beautiful low-rise homes, surrounded by narrow, winding streets. Most homes at the time incorporated design elements and features from two prominent design movements of the time. These houses were also some of the first in the city to have luxuries like private bathrooms for instance. After the turn of the twentieth century, Neve Tzedek really took off as the place to be in Tel Aviv. The area was the home and sanctuary of many notable Israelis from the arts and culture scene. Even one of Israel’s most well-known and respected rabbis called the area home, and enjoyed the company of its educated, cultured residents.

Unfortunately, Neve Tzedek’s hay day was to be short-lived. After the nineteen forties, affluent people and businesses began moving away from the south side of Tel Aviv to the north, newly developed side of the city. Authorities didn’t really take care of the architecture around Neve Tzedek and residents were gradually moving away, from the area, and the Jaffa district too. This meant only one thing – Neve Tzedek was in an urban decay. Sea air and climate specifics eroded away buildings and infrastructure, eventually the neighbourhood was considered to be one of Tel Aviv’s slums. Local authorities had plans to demolish the dying buildings and rotten infrastructure as to give way to high-rise business and residential developments, though they cancelled the project as much of the architecture in the area was entered into special preservation lists. Somehow, the old, worn-out neighbourhood was once again an object of interest for certain social strata, as many people were looking for the semi-pastoral, picturesque look and feel of the old, forgotten Neve Tzedek.

After the nineteen eighties, Tel Aviv authorities began rejuvenating and redeveloping Neve Tzedek through multiple projects of local, and even national importance. These days, there notable museums and cultural centres around Neve Tzedek, as well as many good hotels, bars and restaurants which give guests and visitors a unique Mediterranean village atmosphere. One of the better known hotels in Neve Tzedek is the one owned and managed by Gal Gadot’s husband Yaron Versano. Gal Gadot is the model turned actress, which began her career by winning the two thousand four Miss Israel title, and then moved onto starring in blockbuster flicks in Hollywood. Gal married Yaron in two thousand eight. Choosing Neve Tzedek as the place for Yaron and Gal’s hotel should come as no surprise, as the area is merely three hundred metres from the sea, has an abundance of bars, restaurants and cafes, and provides for some of the most idyllic and relaxed vistas in the whole of Tel Aviv. Three years ago, Yaron Versano and Gal Gadot’s boutique hotel The Versano was called an ‘Amazing & stylish place to stay, a little gem in beautiful Neve Tzedek’ by the New York Times.

The hotel itself is a complex of semidetached, and fully detached villas, bungalows and apartment suites which give guests access to private facilities such as patios, gardens etc. Some of the suite gardens even have fruit trees growing. The architectural style of the hotel is considered to be contemporary urban with clearly defined Mediterranean touches throughout. Guests can choose from different style suites within the hotel complex. Most guests enjoy the hotel’s peace and quiet, as well as its close proximity to prime Tel Aviv beaches, as well as trendy bars and restaurants. Those in the know say that The Versano hotel is right in the middle of Tel Aviv’s foodie district, and one can enjoy exceptional quality meals in many of the eateries around the area. This might come as a surprise but the Versano Hotel doesn’t have a functioning bar or restaurant, which is not that much of a problem since lovely restaurants and delicious food are just a stone throw away from the hotel. The hotel has also got all the modern extras like free Wi-Fi in all rooms, air conditioning etc. Hotel staff is known to be friendly, energetic and very, very helpful. The hotel is arguably, one of the best places to stay in Neve Tzedek.