There is a rumor circulating around the internet that Gal Gadot will make an appearance in “Star Wars” as a Sith princess in an upcoming Disney+ movie trilogy.

These rumors come from a Youtuber Mike Zeroh who is known for making accurate claims in the past. According to him, Gadot will be a part of small-scale films that will focus on the “Dark Side family”. This family is said to be the evil equivalent of the Skywalkers and will fall to the Light Side of the Force.

This “Dark Side” trilogy is reported to be in the early stages of development, therefore, it is said that the studio will confirm Gal Gadot’s appearance by the end of the year.

Mike Zeroh also stated that Keanu Reeves will play King Valar in the “Dark Side” trilogy and it is said that he will have connections to Gal’s character – a Sith princess.

At the moment, many fans of Gadot know that she is pregnant and expecting her third child. She already has two daughters – Maya and Alma Varsano. She recently revealed the gender of her third child – “It’s baby girl number three” she stated in a virtual appearance on “Live with Kelly and Ryan”.

However, her previous pregnancy didn’t stop her from filming her iconic “Wonder Woman” movie – she was pregnant during the shooting of “Wonder Woman”, and in some key scenes she was in the fifth month of her pregnancy. Since her baby bump couldn’t be hidden under her costume, the movie’s costume department cut out a portion of the costume she wore so they could replace it with a green fabric so that it could be edited out later! 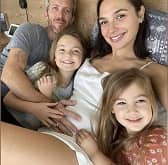